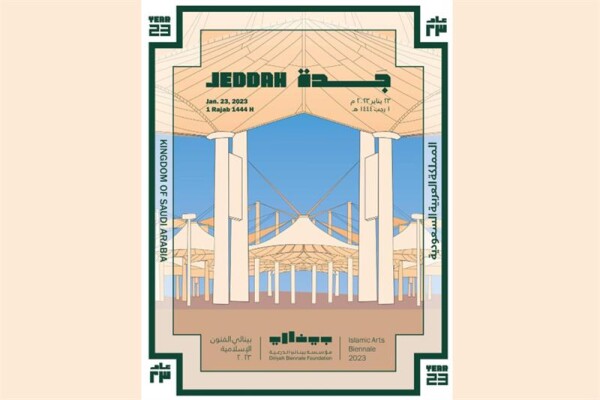 The first Islamic Arts Biennale will take place at the Hajj Terminal, or Canopy Terminal, in Jeddah, the Diriyah Biennale Foundation has announced.

The wealth of historical sites in Jeddah, such as Bab Makkah, combined with the diversity of the city’s cultural heritage “complement the biennale’s objective to interlink past, present and future”, organisers said of the move.

The Islamic arts event will be held more than a year after Saudi Arabia’s first cultural biennale, the Diriyah Contemporary Art Biennale, which took place in the outskirts of Riyadh in December 2021. The event was the kingdom’s largest and most significant international display of contemporary art to date, and featured more than 60 acclaimed international artists. 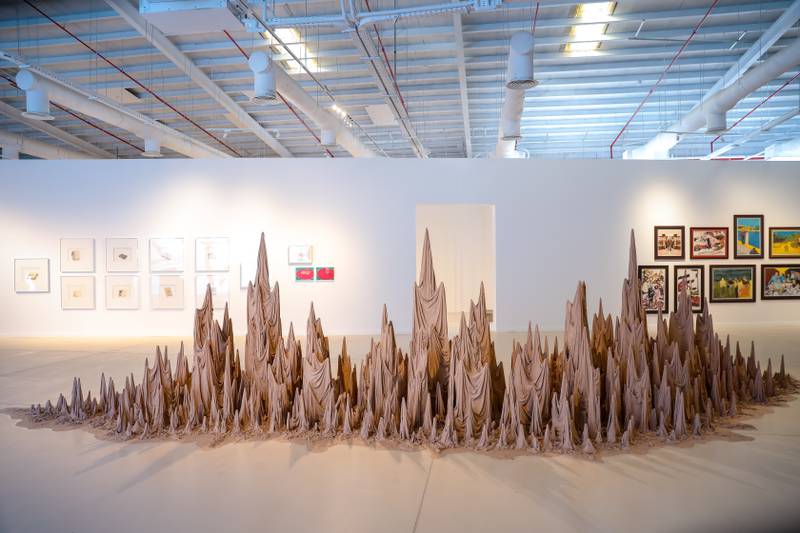 The building was built in 1981 and was awarded the 1983 Aga Khan Award for Architecture. Every year, it welcomes millions of pilgrims and will now become a hub for the celebration of Islamic arts and culture.

A purpose-built, 70,000-square-metre venue will also be erected for the biennale, with facilities such as exhibition spaces, a theatre, a mosque, workshops, classrooms, retail shops and dining outlets.

“It will provide a dynamic contemporary setting for Islamic arts featuring leading practitioners from Saudi Arabia and around the world,” said Aya Al-Bakree, chief executive of Diriyah Biennale Foundation. “This inaugural edition builds on the success of Saudi Arabia’s first contemporary art biennale. Local and international audiences are invited to join the dialogue and to experience the work of leading artists in a unique setting.”

What is Awwal Bayt?

The event will be held under the theme of Awwal Bayt (First House).

The term Awwal Bayt is used in the Quran to signify the Ka’bah in Makkah, the most sacred site in Islam and the direction (qiblah) all Muslims face in their daily prayers.

The biennale’s theme examines how the Ka’bah and the Prophet’s Mosque in Madinah inspire Muslims around the world, creating a sense of belonging in their own home, according to curators.

Galleries and outdoor installations will be curated as such to create a dialogue between sacred sites and rituals. The theme of the indoor galleries will be Sacred Direction (qibla), with Makkah as the focus. The installations, meanwhile, will explore the senses of hijrah (migration).

The works will be both contemporary creations and historical objects. Artefacts originally housed in the Prophet’s Mosque in Madinah and the Masjid al-Haram in Makkah will also be on display in two separate pavilions.

“The theme of Awwal Bayt invites contemplation of belonging,” said curator Sumayya Vally. “As curators, we are excited by the opportunity to create a temporary home, an entirely new physical setting in this context of the Muslim pilgrim’s journey, in which to invite artists and audiences to reflect on ritual, the sacred, the personal and the communal.”

In December, the Diriyah Biennale Foundation launched Saudi Arabia’s first contemporary art biennale in the Jax district of Diriyah. The foundation will now host a biennale every year, alternating between contemporary art and Islamic arts.

“Cultural and artistic exchange are essential in this period of unprecedented growth and development in the creative community in Saudi Arabia,” said Prince Badr bin Farhan Al Saud, Saudi Arabia’s Minister of Culture when the location change was announced.

“The Diriyah Biennale Foundation is at the forefront of this cultural awakening and flourishing art scene. Our contemporary edition closed in March after attracting critical acclaim, and the Islamic Arts Biennale represents our next chapter.”