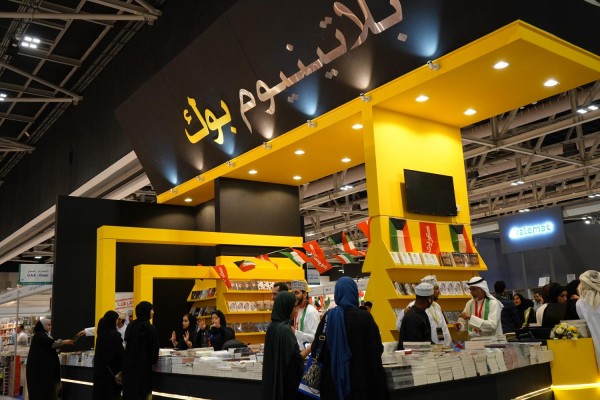 AN OASIS IN THE DESERT

In Oman, one of the most anticipated events of the year is the Muscat International Book Fair, which was first held in 1992.

“The number of visitors has increased year by year, and also day by day. The peak time is actually the last day of the fair. It’s the top of the curve,” said Said Al Saqlawi, president of the Omani Society for Writers and Literati. We spoke inside the society’s stall within the expansive Oman Convention and Exhibition Centre where the book fair was held in late February. Rows after rows of books, mostly in the Arabic language and some in English and others, filled the hall.

The book fair drew 195,000 visitors in 1992, its inaugural year, with books from 19 countries available to the crowd. The number has grown over the years and, by 2017, it was reported that the fair drew more than 826,000 visitors. The number of participating publishing houses and countries also grew.

This year, coming into its 25th edition of the event, the fair remained ever as popular with the locals. Looking around, Omani people of all ages clutched shopping bags as they perused the aisles. It was late in the afternoon, and readers and shoppers were enjoying themselves with the grand selection of books available. The scene spoke volumes about the reading culture in the Sultanate.

Outside the hall, there was an exhibition by the Musandam Governorate, showcasing its heritage through artefacts and handcrafted items. The Read 2020 International Photography Competition also displayed its selected photos that depict people and their books from all over the world. In other areas of the exhibition centre, there were many activities available for children, as well as seminars and discussions directed at adults. These activities have drawn a sizable crowd.

“Most of the people who attend the fair are from Oman. There are also those from other Arab countries, as well as other parts of Asia. We always find children coming from school to buy books that suit their level, too,” Al Saqlawi continued. He said the fair was the third largest of its kind in Arab countries, trailing behind book fairs in Cairo, Egypt, and Riyadh, Saudi Arabia, in terms of buyers and market. It’s also the main book fair in Oman. There is another, smaller fair held in Salalah, but not at the same time.

Books, in all their paper glory, still sell well here. But this could change in the future.

“Only a few people are now reading in electronic format,” said Al Saqlawi. “The number may increase from time to time, but most people still prefer to read paper books. E-books, I think, are something that will be coming in the future. They will be used more by the new generations from every country, who are now getting more electronic and digital materials in universities and schools as they accommodate a more electronic education system.

“The interest in reading is going to change. Now, it’s already changing a bit as people read more using their tablets, programmes and applications — like Kindle on Amazon. I do read electronically, too. Many books can be found cheaply there. And it’s also flexible. You can also copy, quote and translate the phrases much quicker compared to paper books.

“Books will grow on these devices,” he said. “[Regardless of formats], what’s more important is to keep yourself in the reading habit.”

Al Saqlawi said he’s been coming to the event every day for all of its 25 editions. “I like to see books and make friends. I buy some for myself, too, in poetry and arts,” he added. Over the years, the event may have changed in terms of organisation, arrangement and even its location, but what remains the same is how supportive the locals are with their unwavering interest in reading despite growing distraction from the online and digital culture. It’s also beneficial to local writers.

“The book fair encourages local writers to produce research and knowledge, making them put more effort into their works,” he said.

The international interest in Omani and Arabic literature has increased over the years. Last year, Omani writer Jokha Alharthi won the Man Booker International Prize for her novel Celestial Bodies. It was the first Arabic-language work to win the prize, and also reportedly the first novel by an Omani female writer to have an English translation.

There are also many famous Arabic-language writers he’d recommend, including Alharthi, Naguib Mahfouz from Egypt who won the 1988 Nobel Prize for Literature, renowned Lebanese-American poet Kahlil Gibran, and others.

Al Saqlawi said Omani and other Arabic writers are gradually being exposed and recognised internationally as some of their books are being translated in different languages.