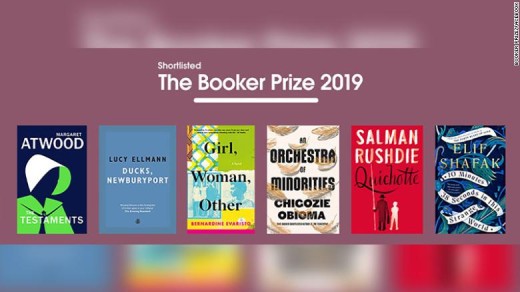 The shortlist was announced on Tuesday by the chair of the judging team, Peter Florence, at a press conference at London’s British Library.

“Like all great literature, these books teem with life, with a profound and celebratory humanity,” he said.

The shortlist, selected from a longer list of 151 books, includes Atwood’s sequel to dystopian classic The Handmaid’s Tale, Ellmann’s monologue by an Ohio housewife, Rushdie’s post-modern rewrite of Don Quixote, Evaristo’s story of female, mostly Black, British lives across generations, Obiomo’s story about the trials of a young Nigerian man on a quest to improve his prospects, and Shafak’s novel about allegiances within the brothels of Istanbul.

The prize is open to writers of any nationality, writing in English and published in the UK or Ireland.

The 2019 winner will be announced on Monday 14 October at an awards ceremony.