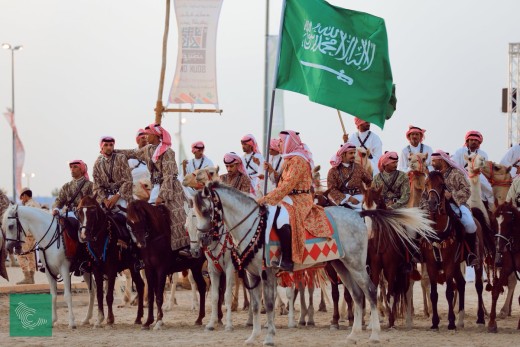 The Souk Okaz Festival kicked off in the Taif region in Saudi Arabia with 11 Arab countries participating, sharing cultural and social heritage and presenting a diversity of rich cultural and artistic activities.

In the pre-Islamic era, Arab tribes used to have three major fairs that served as commercial, social and cultural hubs for the whole region. They took place in various parts of the Arabian Peninsula on a regular basis. Arabs used to travel from far and wide to these fairs to trade and listen to sermons and self-glorifying speeches. They had poetry contests during these fairs, adjudicated by the greatest bards among them.

Souk Okaz was one of those three major fairs. The others were the Majana and the Dhi Majaz fairs. Souk Okaz dates to 501AD and was an annual 20-day event.

That was how the organising committee of Souk Okaz Festival introduced its marquee event, which took place in Taif in August. The modern rendition of the fair combines various arts and literature and attracts stars of Arabic poetry and song, as well as scholars, thinkers and researchers.

The festival serves also as an occasion to honour writers and intellectuals from inside and outside Saudi Arabia and hosts exhibitions of popular culture in several Arab countries.

The idea of ​​reviving the historic Okaz fair is credited to the late Saudi King Faisal bin Abdulaziz, as noted by Prince Khalid al-Faisal, governor of Mecca and president of the festival’s organising committee.

“The Souk Okaz was not brought back to life from the past, after such a long absence, just so it remains a prisoner to that past,” said Prince Khalid. “The festival came to transpose the fair’s past into the reality of the present and to serve as a platform to look into the future.

It is meant to introduce the intellectual and cultural heritage of the Kingdom of Saudi Arabia to the entire world and to showcase the cultural and intellectual history of the Arab and Islamic civilisation which had emerged from the Arabian Peninsula.

“The fair is also meant to serve as a window onto the future for Saudi citizens, especially young men and women, to glimpse at what is being planned for the future of this world and the future of humans on this planet.”

In its 13th edition, Souk Okaz Festival offers cultural, sports, social, commercial and economic events focusing on the specificities of the area while still open to the rest of the kingdom and the Arab world.

Jadat Okaz — Okaz Main Street — is a favourite among festival goers. More than 2,000 professional actors, donning period costumes and speaking Classical Arabic as if they sprang straight out of ancient history, roamed the fairgrounds.

This year’s edition of the festival featured more than 70 events spread over four main areas of the fairgrounds and the city.

The “Arab Neighbourhood” in the middle of Souk Okaz is a new event presented under the umbrella of the “Taif Season.” In addition to hosting the Saudi pavilion, it has pavilions from Lebanon, the United Arab Emirates, Kuwait, Oman, Bahrain, Iraq, Jordan, Egypt, Tunisia and Morocco.

One of the festival’s activities, hosted by the Saudi National Museum, presents pathways and trade routes used by the inhabitants of the Arabian Peninsula, providing art and history aficionados with a glimpse of the role played by trade in the area.

The exhibition includes nearly three dozen archaeological artefacts discovered in the kingdom, ranging from the Neolithic period, about 5000BC to the pre-Islamic and early Arab civilisations, to the Islamic and medieval Islamic eras and up to the three stages leading to the establishment of the modern Saudi state.

Another initiative is the “Rose Village” in al-Rudaf Park, which hosts events celebrating roses, such as the Rose Museum, the Perfume Laboratory, the Rose Orchestra, the Rose Circus and rose manufacturing handicrafts.

The Crown Prince Camel Festival, one of the world’s largest and most important camel races, is a highlight of the festival.

The festival has resuscitated the tradition of horseback riding by women, through a first-of-its-kind event for Saudi female horse riders to show their skills riding purebred Arabian horses in programmes combining beauty and agility.

Poetry is given ample time in the festival, with seminars and recitals as part of the competition for the Souk Okaz International Prize for Classical Arabic Poetry administered by the King Faisal Centre for Research and Islamic Studies. For the first time, the poetry competition was broadcast as an interactive Arabic television show.

There were 22 poets from 11 Arab countries competing for the poetry prizes. They were selected from an initial pool of 161 candidates.