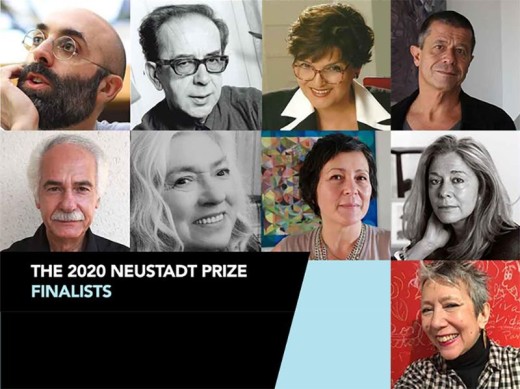 World Literature Today announced the nine finalists for the 2020 Neustadt International Prize for Literature, which was first awarded in 1970. The prize, which comes with a $50,000 purse, likens itself to a US-based Nobel Prize. The prize is unlike most other literary awards in that each judge nominates an individual writer, and all the judges decide amongst those selected candidates.

Naguib Mahfouz Medal-winning Sahar Khalifeh’s Door to the Courtyard, or Bab as-Saha, is her most acclaimed work. A translation by Sawad Hussain is finally coming out in Spring 2020 from Seagull Books. You can find at least these five other novels by Khalifeh in English already: Of Noble Origins (trans. Aida Bamia, AUC Press), The Inheritance (trans. by Aida Bamia, AUC Press); Wild Thorns (trans. Trevor Legassick and Elizabeth Fernea, Interlink); The End of Spring (trans. Paula Haydar, Interlink); and The Image, the Icon and the Covenant (trans. by Aida Bamia, Interlink).