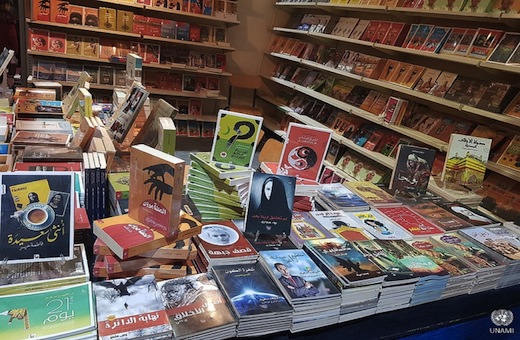 “It is the most important cultural event and I make sure to attend every year,” said university student Ahmad Jassem, 22, as he entered Baghdad International Book Fair.

“It is the first weekend that I skip going to Al Mutanabbi Street (Baghdad’s historical bookselling hub). With the large number of titles offered in the fair, I am certain that I will find new literature and scientific books that I need,” he said.

Some 700 publishing houses and bookshops from 23 countries descended on Baghdad for the 46th Baghdad International Book Fair, which occupied an area of 10,000 sq.metres, the largest in the history of the event since it began in 1979, said Abdel Wahab al-Radi, president of the Federation of Iraqi publishers.

“It is the most important edition by far, in terms of the number of participants and the large variety of books on display,” Radi said. “None of the proposed titles was banned or censored. Participants had the freedom to offer new books covering multiple subjects.”

Encouraged by the relative security and stability in Baghdad after years of conflict and terrorism, many Arab and foreign publishing houses participated for the first time at the fair, which took place February 7-18.

“It was a great achievement for the country and for us as organisers. It amounted to an international acknowledgement of Baghdad’s important cultural standing in the Arab world and throughout the ages,” Radi said.

The event involved prominent Iraqi, Arab and international writers signing books and participating in discussions and answer the public’s queries. Among them were Jordanian-Palestinian novelist and poet Ibrahim Nasrallah, the winner of the International Prize for Arabic Fiction for “The Second War of the Dog”; Lebanese poet Zahi Wehbe; Georges Kurdahi, a Lebanese media figure; and Portuguese poet Afonso Cruz.

Lebanese publishers were also largely represented at the fair this year.

“Taking part in Baghdad’s book fair is of great value for Arab publishers,” said Nasser Rahouli, representative of the North Lebanon Publishing house. “The Iraqi market cannot be ignored given that Iraqis have such a great passion for books and reading.”

“It is important and necessary for us to be part of the Baghdad book fair from an economic and marketing point of view. Iraqis are such big readers and this we cannot disregard,” said Hicham Karam, marketing officer of Dar al Saqi.

Karam complained about book forgery and copyright violations. “It is one of the greatest problems that we encounter in Iraq. Many of our most popular publications are being pirated,” he said.

A corner on the fair was dedicated to children’s activities and animated by authors of children’s books, including Iraqi poet and writer Qassem Saoudi, mastermind of “Let’s Write in Baghdad” initiative, which teaches children aged 7-12 to write and illustrate short stories for other children.

Children enjoyed listening to storytelling by the stories’ writers in a cosy and festive atmosphere. “I can’t describe my feeling of joy amid this ‘jungle of books.’ Since learning how to read and write I always have a book in my hand. My mother makes sure to take me to Al Mutanabbi Street every now and then to buy new books,” said Farah Rachid, 8, as she held her latest acquisition, a book titled “The Wax Butterfly.”

Iraqi President Barham Salih, who opened the fair, said that “freedom of thought and expression, which is guaranteed under the Iraqi Constitution, is consolidated by freedom of movement of the book” and should be beyond any censorship “as long as knowledge and thought promote freedom, peace, human dignity and good coexistence among people.”

The 46th Baghdad International Book Fair was one of the most successful editions, drawing a record 1 million visitors, mostly among younger generations, Radi said.

“It is a message that Baghdad is still an advocate of peace and culture and that it has the most readers in the Arab world,” he added.