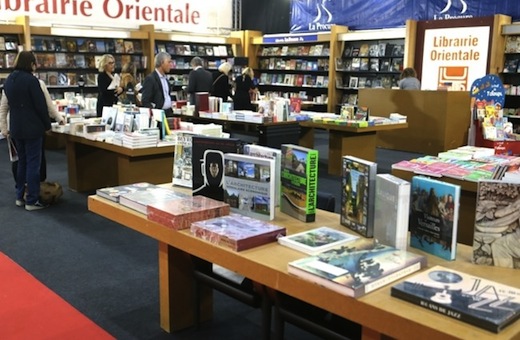 The 25th Salon du Livre kicked off at the Beirut International Exhibition and Leisure center in Furn al-Shubbak Friday evening. This year’s edition of Lebanon’s francophone book fair adopted “digital culture” in literature as its theme.

Vendors at this year’s SdL have expressed conflicting notions about the presence of technology in the literary world. Some say it should be embraced. Others say Lebanon is still able to hide from the digitalization of literature.

The SdL has been a staple in the French literary scene of Beirut for the last quarter of a century and 180 authors from around the francophone world will attend this year’s edition. Amongst other world-renowned authors, Lebanese author and playwright Elias Khoury, award-winning Syrian novelist Khaled Khalifa and bestselling French novelist Katherine Pancol will be attending.

Though it is still a vibrant and well-visited event many of the people The Daily Star spoke with on the opening day of the fair, including Zena Kfouri, marketing specialist for Librairie Orientale, have noticed a decline in popularity over the 25 years. When asked why she believes this is the case Kfouri told The Daily Star: “The people need a change. It’s always the same thing.”

With digital technology ever-more present in our lives, some have decided to use it to educate. Digital “technology is becoming [as big a] part of education for our children,” as books have been for past generations, said Rita Doumet, co-founder of bmbsmart, a startup that teaches children how to code.

Standing in front of two small robots atop a table, Doumet and bmbsmart co-founder, Reina Lebreton spoke about the need to use literature and digital technology together. Though many find it can be hard to see how technology doesn’t take away from literature, Lebreton sees things differently.

Others in the field of literature also recognize the compatibility of books and digital technology.

“I think the one pushes the other,” manager of distribution at the Institut Francais du Proche Orient, Lina Nacouzi, said. “That doesn’t mean the paper won’t continue, and it’s not to say [technology] doesn’t work.”

Though there is a movement to embrace the digital revolution in Lebanon, others at the fair note that the country still has not yet fully embraced the digital.

“As a bookstore, we don’t have much digital,” Kfouri said, “because the digital, in my opinion, doesn’t really work in Lebanon, [due to] the problem of connection and of downloading.”

A representative for Librairie Antoine, a bookstore with 15 locations across Lebanon, said e-books’ lack of popularity is not a Lebanese phenomenon, rather a worldwide one. The notion that younger generations prefer to read on tablets, or other screens, is proving less universally true than was once thought.

Lennie, who is 9 1/2 years old, told The Daily Star “books are better” than tablets.

The digital revolution may not have yet hit Lebanon’s book culture with full force, but many are saying that conventional book sales are down. “The change in Lebanon was soft,” said Paule Hekayem, owner of Le Point bookstore. “It was not brutal. People still love the books [but] we realize, when we do the balances, that there is decrease of sales of books. The technology is taking hold more and more.”

Separate from the idea that technology detracts from printed literature, Kfouri believes a more significant factor is money.

“The people today, they count their money,” she said. “For example, we have art books that cost around 200 to 300 euros. Two or three years ago, people bought these books. Today, much less.”

The Salon du Livre is not purely a market for people to shop for books; it is a fair where students and literature lovers alike can experience a whole world of writing.

Over this week, there will be a number of roundtables discussing a myriad of topics from politics to technology. The winners of a long list of French literature prizes will also be announced, and authors from all over the francophone world will be presenting their newest creations.