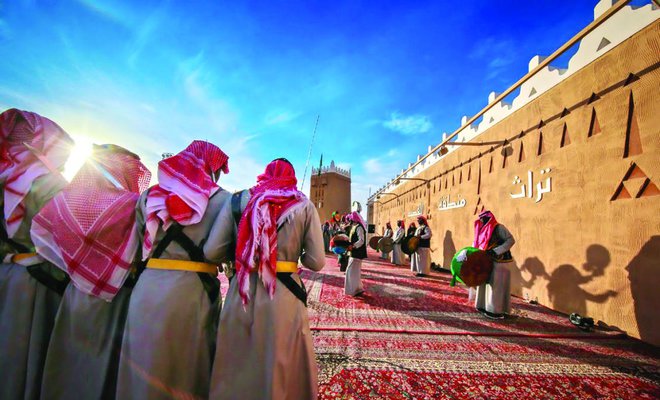 Janadriyah, the annual national heritage and culture festival named after the village on the northern outskirts of Riyadh, is busy encouraging people to uphold values and heritage as well as enhance cultural exchange.

The festival offers a balanced view and a flashback to Saudi Arabia’s rich heritage.
The festival attracts a remarkable turnout of local and expatriate visitors, as well as visitors from outside the Kingdom.
It is open daily from 11 a.m. to 11 p.m., and the first five days, from Feb. 7 to 11, are reserved for male visitors only. Women and families will be allowed to visit from Feb. 12 to 24.

Al-Shananah Tower attracts visitors to Qasim’s pavilion
The historic Al-Shananah Tower at Qasim’s pavilion has attracted many visitors who were also introduced to Qasim’s heritage.
The facilities of the pavilion also include areas for crafts, camel riding, a traditional cafe, games, heritage cars, Qasim hospitality, and a wall mural titled “A Homeland’s Vision.”
Al-Shananah Tower, also known as Al-Shananah Observatory, is an archaeological landmark in the ancient town of Al-Shananah in Qassim province.
The tower was built of clay and hay in the early 12th century Hijri for monitoring purposes.
On each of the tower’s ten floors, there is an opening to let air in and for monitoring the surroundings. The tower’s floors are decorated outside and inside with ancient inscriptions.
The ceilings of each floor are supported by wood and palm leaves.

Tabuk pavilion features province’s crafts and heritage
The Tabuk pavilion has attracted visitors interested in learning more about the province’s heritage, history, and archaeological sites that have made it an important tourist destination.
Forty-five people introduced the handicrafts featured at the Tabuk pavilion, including fishing nets and rattles, water telescopes, and ropes. Participants also educated visitors on Tabuk’s ancient architecture, as well as sailing ships and how they are made, carpentry of ancient doors and windows, and sail making.

Heritage village reflects province’s history and civilization
Jazan’s heritage village captures Jazan’s present and past in one place.
Visitors are met with Al-Baitul Jabali, with its solid architecture specially designed to suit the mountain’s environment and overcome natural erosion.
The simplicity and elegance of the Tihami lifestyle are visible in Al-Baitul Tihami, the traditional conic hut known as Al-Ousha Attiniya (the mud nest), while Al-Baitul Farasani embodies the marine environment of Farasan Island with its sea, pearls, and shells.
The cultural center in Jazan’s heritage village captures the region’s booming development and highlights the most recent cultural achievements in Jazan.

MWL wing highlights league’s role in the Islamic world
The Muslim World League (MWL) at Janadriyah received many visitors who toured the wing which introduces the efforts of the MWL and its pioneering role in spreading moderation as the foundation of the message of Islam.
Visitors to the wing were briefed on the international conferences sponsored by the MWL in various countries of the world.
The MWL will hold its first seminar this month, which will be attended by more than 1,000 followers of various religions.