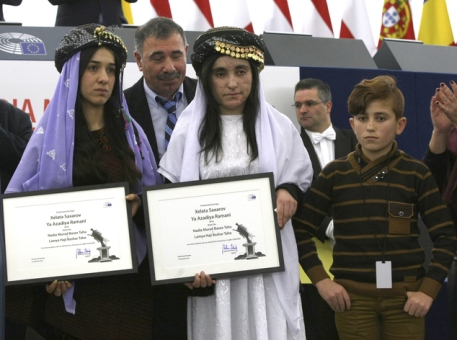 Yazidi women from Iraq, Nadia Murad Basee, left, and Lamiya Aji Bashar, pose with their award while Bashar's brother Vad, right, looks on after receiving the European Union's Sakharov Prize for human rights from the hands of European Parliament President Martin Schulz, right, at the European Parliament in Strasbourg, eastern France, Tuesday Dec. 13, 2016. Two Yazidi women who escaped sexual enslavement by the Islamic State group and went on to become advocates for others have won the European Union's Sakharov Prize for human rights. The award, named after Soviet dissident Andrei Sakharov, was created in 1988 to honor individuals or groups who defend human rights and fundamental freedoms. (AP Photo/Christian Lutz)

Two Yazidi women who escaped sexual enslavement by the Islamic State group accepted the European Union’s Sakharov Prize for human rights on Tuesday and said they would continue to be a voice for others suffering a similar fate.

Lamiya Aji Bashar, 18, said the EU’s top human rights prize was one “for every woman and girl who has been sexually enslaved” by IS.

With poignant testimony that silenced EU lawmakers, she and 23-year-old Nadia Murad spoke of their personal fate and escapes. The focus of their message, however, was a demand that the international community protect their people, a minority of 500,000 living primarily in northern Iraq.

Hundreds of Yazidi women and girls are still captives of IS militants in Iraq and Syria. The Yazidi follow an ancient religion that IS and other Muslim hard-liners consider heretical.The award, named after Soviet dissident Andrei Sakharov, was created in 1988 to honor individuals or groups who defend human rights and fundamental freedoms.

The two winners and thousands of other Yazidi women and girls were abducted, repeatedly raped and traded among IS fighters after the Iraqi area of Sinjar fell to Islamic State extremists in August 2014. Murad escaped after three months while Bashar tried to flee four times before finally escaping in March. As fighters pursued her, a land mine scarred her and left her unable to see out of one eye.

“They wanted to take our honor but they lost their honor,” Murad said at the ceremony. Both are now demanding that those responsible face an international court for war crimes.

Among the finalists for the prize this year were the Crimean Tatars and a former Turkish newspaper editor.