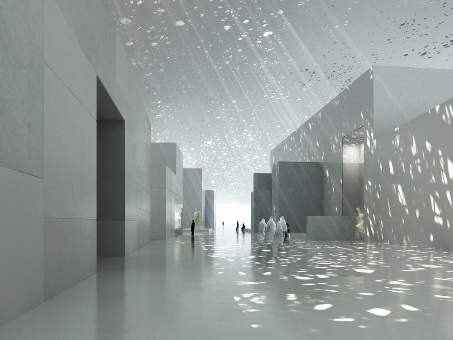 The Louvre Abu Dhabi has announced that American neo-conceptualist artist Jenny Holzer and veteran Italian sculptor Giuseppe Penone will make up the first lot of contemporary artists to create installations for the permanent collection of the Saadiyat Island museum.

“In line with Louvre Abu Dhabi’s ambition to reflect the universal nature of art-making, we have commissioned contemporary works by the internationally renowned artists,” Mohamed Khalifa Al Mubarak, chairman of Abu Dhabi Tourism & Culture Authority (TCA Abu Dhabi), says in a statement that accompanied the announcement.

“The artists’ works are inspired by the museum’s iconic architecture and diverse stories, and play an important role in connecting the cultures and civilisations of our past with the relevant ongoing conversations and artistic practices of today.”

Penone, who rose to fame in the late 1960s as the youngest member of the Arte Povera movement, has created a four-part installation, Germination, which addresses the relationships between humanity, art and the natural world, themes that the 69-year-old sculptor has examined throughout his career.

Leaves of Light is a bronze cast of a wild cherry tree, a symbol of life from the artist’s native Maritime Alps in Piedmont, near Turin. Set with mirrors, the sculpture has been designed to capture and reflect the kaleidoscopic rain of light that is generated by the museum’s canopy.

Penone collaborated with French porcelain manufacturer Sèvres on Propagation, on a series of ceramic tiles with a hand-drawn, concentric pattern emanating from a central fingerprint, a motif that Penone has been exploring in various works since 1994.

“The artworks that I have developed for Louvre Abu Dhabi aim to inscribe themselves in the place, underscoring aspects of its architectural form and content,” Penone explains. “The pieces that make up Germination echo the museum’s universal spirit.”

Holzer’s work for the Louvre Abu Dhabi is equally characteristic. Text-based, it takes the form of three engraved marble panels, each to be installed in an external wall of the museum’s galleries.

The panels feature draws from three historic texts: a reproduction of an ancient Mesopotamian cuneiform tablet that bears a Sumerian-Akkadian creation myth; a quote from the French Renaissance philosopher and essayist Michel de Montaigne; and a passage from the medieval Islamic polymath Ibn Khaldun’s 14th-century Muqaddimah.

Widely regarded as the most important piece of Islamic history of the premodern world, the Muqaddimah, or Introduction, is a monumental work that many scholars consider as a foundation for modern fields of enquiry, such as economics, sociology, ethnography and the philosophy of history.

The Louvre Abu Dhabi will not be the first Ateliers Jean Nouvel-designed building to include a text-based installation by Holzer. For French architect Nouvel’s Palais de Justice de Nantes, which was inaugurated in 2000, Holzer created an LED installation that uses some of the founding texts of French law, including the Civil Code and The Declaration of Human Rights, which scroll slowly down the steel columns in the building’s concourse.

At the Louvre Abu Dhabi, however, Holzer and Penone’s installations will also be shown alongside historical pieces from the museum’s collection, including an 18th-century Ottoman fountain and pavement from Damascus, Syria.

“It was important to find the right artists and to work with them in dialogue to create artworks that are meaningful in this context,” explains Jean-Francois Charnier, scientific director for Agence France-Muséums the body that, alongside Abu Dhabi’s Tourism & Culture Authority, is charged with providing the necessary technical know-how and coordination for the delivery of the Louvre Abu Dhabi.

“They enrich the narrative of the museum. The Louvre Abu Dhabi has a permanent collection that forms a core that tells a story, about the unity and diversity of humanity, and I believe that the work of Jenny Holzer and Giuseppe Penone speak to that,” Charnier says.

“They are a materialisation of those questions and they represent a new way, a different kind of perspective and intelligence, when it comes to thinking about the issues raised by the museum.”