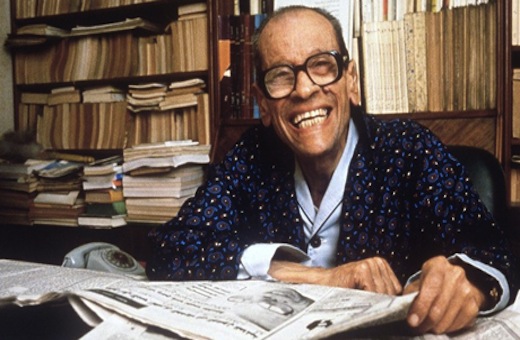 It has been a decade since the death of Naguib Mahfouz, Egypt’s most famous novelist and the only Arab writer to have won a Nobel Prize, and yet he still dominates the Egyptian literary scene

Young writers idolise him or hold him up as an authority figure to rebel against, his novels remain on the bestseller lists, or are turned into successful television series.

The reason for the novelist’s continued vivid presence, as Gaber Asfour, the renowned critic puts it, lies in the fact that “he digs deep in the moment that he is dissecting to reach to the depth of the human struggle and emotions.

“He connected well to his time in a way that connected him to time in general; he started from a certain temporal and spatial point but he digs deep to reach the human dimension of this point.”

“He lives through his literature even now and will keep on living for hundreds of years,” said Asfour.

The literary scene has changed a lot since Mahfouz died in 2006; a new generation of young writers have emerged as publishing has become easier, and they are reaching new readers.

These writers have always had some kind of a relationship with Mahfouz’s works, either by taking him as an example or by trying to rebel against his way of writing and the traditions he has set.

“That’s normal and very healthy when you are in a dialogue with a rich and large phenomena like the Mahfouzian one,” Asfour says.

Ahram Online spoke to three young writers to find out how Mahfouz has affected their work.

“Mahfouz’s legacy has left a very deep trace on the writers who read his works without extremism, and by that I mean without sanctification or prejudice, and without taking what he wrote lightly,” said Mohamed Abdel-Naby, the author of the novels In the Spider’s Chamber and The Return of the Sheikh.

But there could also be negative effects, he believes, if writers try to avoid the path Mahfouz took and achieve an effect that is artistic and aesthetic but lacks the sense of belonging to the real world that marks Mahfouz’s works.

Abdel-Naby doesn’t believe that there is a direct relationship between his writing and Mahfouz’s oeuvre, except for references in his works to certain lines from Mahfouz.

“Some of Mahfouz’s characters have left their own fingerprints on characters that I have created in my novels also,” he adds.

The young writer believes that Mahfouz’s work will be rediscovered many times and inspire yet more writers and critics in the future.

Writer and translator Mohammed Sayed Abdel-Rehim, by contrast, has always engaged with the works of Naguib Mahfouz; they have served as inspiration and motivation, but have also been a source of frustration.

“Motivation comes when you feel the challenge he poses for you as a young writer, who wishes to present works that the readers respects, just like your master did; but you get frustrated when you discover that he wrote every idea and emotion in all the narrative ways that you can imagine,” says Abdel-Rehim.

Such a vision of your favourite writer makes you swing between the two moods, but when Abdel-Rehim re-read Mahfouz’s books after the 2011 revolution, a third mood was added to that; a feeling of bewilderment, similar to the one that caused Mahfouz to stop writing for seven years after the 1952 revolution, though he was a very well-established writer at the time.

“A feeling of bewilderment overwhelmed me; how can I write about the present and put my ideas to readers through my literature while writers and intellectuals are being imprisoned, sued and books are confiscated?” he says.

But the lesson that Abdel-Rehim learned from the writer of The Palace Walk was his persistence and faith that a writer’s job is writing and that good writing is capable of making change happen.

Ahmed Shawqi Ali has always been struck by how strict Mahfouz was in his lifestyle and writing, but what surprised him is how experimental he was.

“Despite his strictness he created three of the most experimental works in Arabic literature: Morning and Evening Talk, Dreams of the Rehabilitation Period and Echoes of a Biography,” the writer of the novel Tales of Beauty and Sadness said.

Shawqi wonders how a 70-year-old writer could have the strength to experiment like a younger person, creating this exotic literary structure that is still hard to fathom.

Shawqi doesn’t have any hostility to Mahfouz’s style of writing though he uses the term “Mahfouzian style” sarcastically to describe any modern novel written in a classical way.

He says that the term isn’t meant to devalue Mahfouz’s style but instead as criticism of the kind of writer who uses the master’s style instead of discovering his own voice.

“In the end Mahfouz developed the primitive form of the novel to make his own form and style, so why don’t we walk in Mahfouz’s path to reach new roads?” asks Shawqi.