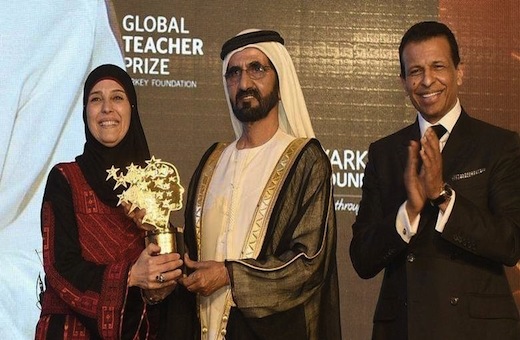 “I did it … Palestine won,” shouted Palestinian teacher Hanan Al Hroub after Pope Francis announced her name in a televised statement at the Global Teacher Prize award in Dubai on Sunday. The national flag of Palestine rose high and proud after the winner was announced.

The Global Teacher Prize, hosted by the Varkey Foundation, awarded $1 million to Hanan, the second person until now to get the best teacher title.

With special televised messages from Joe Biden, Vice-President of the US; Bill Clinton, former president of the US; Prince William, Duke of Cambridge; and physicist Stephen Hawking, the event marked a historic moment towards the appreciation of teachers.

Hanan was one among the 10 finalists for the Global Teacher Prize. She took the opportunity to congratulate all her co-nominees and said that as teachers “(we) can build the morals of young minds to ensure a fair world, a more beautiful world and a more free world.”

Hanan also took the opportunity to highlight the state of violence in her home country and how only education can change mindsets and bring about a positive change for the future. “There is no doubt that we live in unnatural conditions. Violence and Israeli occupation surrounds us from all sides … Our task as teachers is complicated as we see daily the suffering in the eyes of our students and our teachers.”

In an earlier interview, she told Khaleej Times that she faces severe shortages and infrastructural limitations in her classrooms. “Sometimes there are 35 to 40 children in one class and many of the teaching tools we have are outdated … We have very little infrastructure. With the winning, I intend to change that,” said Hanan. “I want to invest more in the education and psychological betterment of students.”

Joe Biden said he was impressed to see how the UAE is paving the way for education via a televised statement. He said: “Education is the key to future opportunity and the key to unlocking a life-long journey of learning is a teacher.”

Prince William said teaching is an incredible responsibility and that the Royal Foundation of the Duke and Duchess of Cambridge and Prince Harry “is honoured” to be partnering with the Varkey Foundation on various schemes that celebrates teachers.

Reem Ibrahim Al Hashimi, Minister of State for International Cooperation, said: “Great teachers are also great artists; they are possibly the greatest because their canvas is the human mind.”

She said teachers are the true architects of the future.

Vikas Pota, CEO of Varkey Foundation, said: “Without teachers there is no progress.”