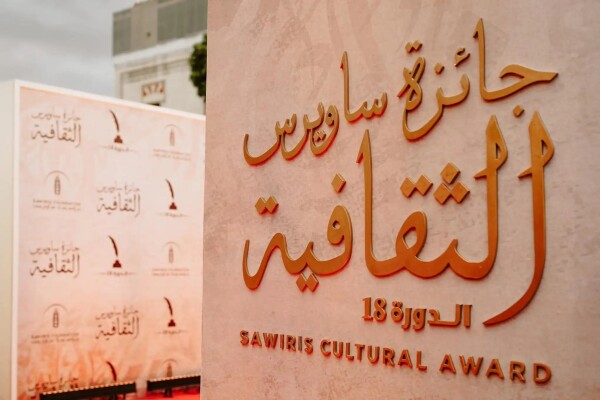 Egyptian writer Shady Lewis, who lives in London, won and turned down a Sawiris Cultural Award over the weekend, igniting a firestorm of commentary online.

Lewis was awarded the prize in the category of best book by an established writer for his acclaimed novel A Brief History of Genesis and Eastern Cairo (تاريخ موجز للخليقة وشرق القاهرة, Dar Elain, 2021).

His agency, teneleven, writes that “The prizewinning novel, A Brief History of Genesis and Eastern Cairo (Dar Elain, 2021) unfolds during a breathless few hours of armed confrontation between security forces and Islamists, and is based on real events which took place in Cairo in 1989.”

Lewis made his announcement on Facebook after the awards ceremony, which was held in downtown Cairo.

He wrote that he was “certainly happy with the news and grateful to the award committee for choosing it,” adding that he planned to give the prize up and ask organizers to remove his name from the lists of winners.

Lewis later clarified, to al-Dustour, that he had “no doubts about the integrity of the awards committee and its selections, year after year, but I have a declared position about which I have written more than once about the political economy of culture, including awards.”

Also on Facebook, Lewis added that he was surprised by the force of people’s reactions.

The award, now in its 18th year, is presented annually by the Sawiris Foundation for Social Development in several categories: novel, short story, criticism, cinematic script, theatrical text, and children’s literature. This year, there was also a special award for the late journalist Mohamed Aboulgheit for his investigative articles and recently published book, I am Coming, Light. Aboulgheit died in London in December at the age of 35.

The award ceremony was held on Sunday evening. The award for the best short-story collection for an established writer went to Ahmed Abdel Latif for his The Kingdom of Mark Zuckerberg and His Fairy Birds (مملكة مارك زوكربيرج وطيوره الخرافية), published by Dar Al-Mustawasit Publishing.

The novel prize for emerging writers went to Charles Akl for his novel Red Like Orange (أحمر لارنج), published by Dar Al Karma, while Muhammad Sorour won the best short-story collection in the young writer category with his Three Traps for a One-eyed Wolf (ثلاثة فخاخ لذئب أعور). The books were chosen from a five-book shortlist.

Other prizes included a prize for the best work in the field of literary criticism, which was co-won by Bahaa Jahin for The King and the Owner and Magdy Gerges for Teacher Ibrahim Johari… An Egyptian Biography from the Eighteenth Century. There were also two winners in the category of best book for children under 12: Ahmed Qarni and Nima Zaidan, for Why the Crocodile Doesn’t Fly, and Ashraf Abu Al-Yazid and Yasser Jaisah, for My Cat Is Writing a Book.