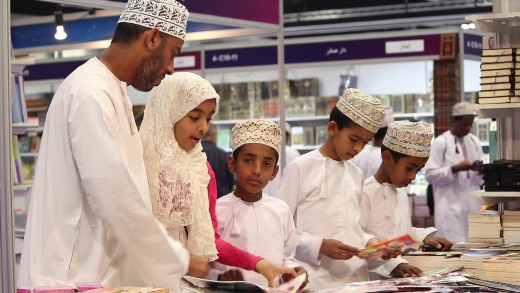 OVER 500,000 BOOK TITLES ON DISPLAY AT MUSCAT BOOK FAIR

The comments came during a press conference held over the opening of the 24th edition of the fair, which will be open until March 2.

The fair’s official website added, “There will be four halls for cultural events and an enlarged corner for children’s activities, a segment set aside for cultural community initiatives, and cultural coffee shops in a number of participating wings.”

Furthermore, there will be “authors present to sign books and negotiate deals, as well as organisations from the business when it comes to publishing and packaging. Publishing houses will also be present”.

The fair has also announced an expansion of services, such as parking, food, and electronic services.

Should visitors wish to search for a specific book, the fair also features a specialised electronic search engine for visitors to find books before visiting the events in person.

It will also be easier for visitors to make electronic purchases, as “there will be voluntary services for e-payments via an Omani company”.

This increase exemplifies visitors coming for the books, but participants and publishers also play a major role. Al Bhaj Books Oman L.L.C, one such company, is “geared up to participate in the 24th International Book fair to be held at the Oman International Convention Centre”, according to a statement by the company.

Shouckath Ali, MD of the company, observed that there is a craving to know more about literature and authors. Being an ardent book lover, he is determined to ensure that the books address the young readers of the country, as they are “the building blocks of a better tomorrow”.