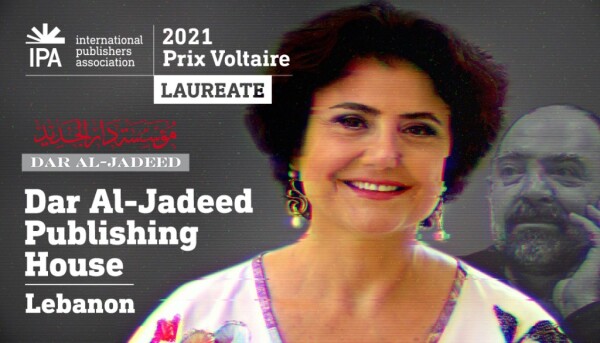 The Beirut-based publishing house was chosen from a shortlist of five nominees, all recognized for their “exemplary courage in upholding the freedom to publish and enabling others to exercise their right to freedom of expression.”

Dar Al Jadeed was founded in 2000 by Lebanese filmmaker and researcher Lokman Slim and his sister, the author Rasha al Ameer, with the aim of publishing “cultural works free from ideological conflict or partisanship.” In February 2021, Lokman Slim was murdered after a campaign of threats and intimidation.

Through the Prix Voltaire, the International Publishers Association stands with individuals and organizations which share our commitment and devotion to freedom to publish as a fundamental right. Publishers, and our colleagues throughout the publishing value chain, need to know that they have the collective support of the entire industry behind them when they face unjust persecution and censorship. This year’s Prix Voltaire laureate paid the ultimate price standing up for freedom of expression as an enabler of tolerance and conflict resolution in Lebanon. His loss is a loss to the entire international publishing community.

Al Ameer is set to receive the Prix Voltaire in person at Guadalajara International Book Fair, on November 30.

Also on this year’s shortlist was the Samir Mansour Bookshop for Publishing in Gaza, which was destroyed in an Israeli missile attack on Gaza in May 2021.

The Prix Voltaire comes with a CHF 10,000 monetary award. According to organizers, “The IPA Prix Voltaire is unique in honouring the freedom to publish,” without which, they note, “many forms of freedom of expression would be impossible.” They add that: “Publishers who provide authors with the tools to disseminate their written ideas assume the same risks as the writers themselves.”

The 2019 Prix Voltaire went to Egyptian Publisher Khaled Lutfi, who founded Cairo’s Tanmia Bookshop and Publishing in 2011 and was sentenced to five years in military prison in 2019 on charges of “divulging military secrets” and “spreading rumors” for publishing a book in translation.