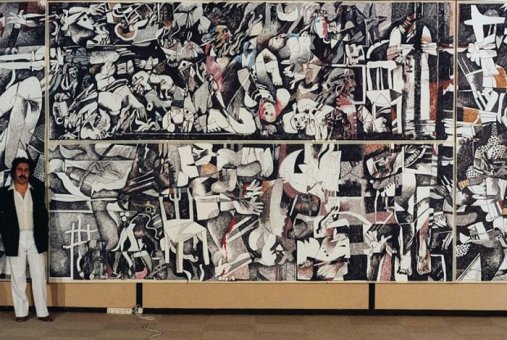 A woven tapestry that pays tribute to the Sabra and Shatila massacre might hang next to Picasso’s Guernica in the Reina Sofía museum in Madrid.

The piece is currently in London’s Tate museum.

What started as a drawing of ink and crayon by Iraqi visual artist Dia Al-Azzawi will be turned into a 21 square meter wall hanging by The Royal Tapestry Factory in Madrid.

It was commissioned by Ramzi Dalloul, an avid aficionado and collector of Arab art.

A dozen weavers are working on the tapestry at the 300-year-old factor.

Spain’s culture minister has asked Dalloul for permission to display the painting at the museum, alongside the iconic Picasso piece.

The Guernica commemorates the 1937 bombing of the Spanish city of the painting’s namesake by German Nazi and Italian forces. It is considered an emblem of human suffering in World War II.

The Sabra & Shatila tapestry’s placement next to The Guernica suggests an elevation in the visibility of the Palestinian massacre after decades of virtual Western media black-out.

The event depicted is a massacre that happened in 1982 when a Lebanese militia close to the Kataeb Party killed 762 and 3,500 Palestinian and Lebanese Shiite civilians.

Between September 16 to 18, a widespread massacre was carried out by the militia virtually under the eyes of their Israeli allies.

Israel has repeatedly dismissed accusations of complicity in the attack.